Who’s Putting You To Sleep? The Value Of Certified Nurse Anesthetists (CRNAs) In Clinical Practice. 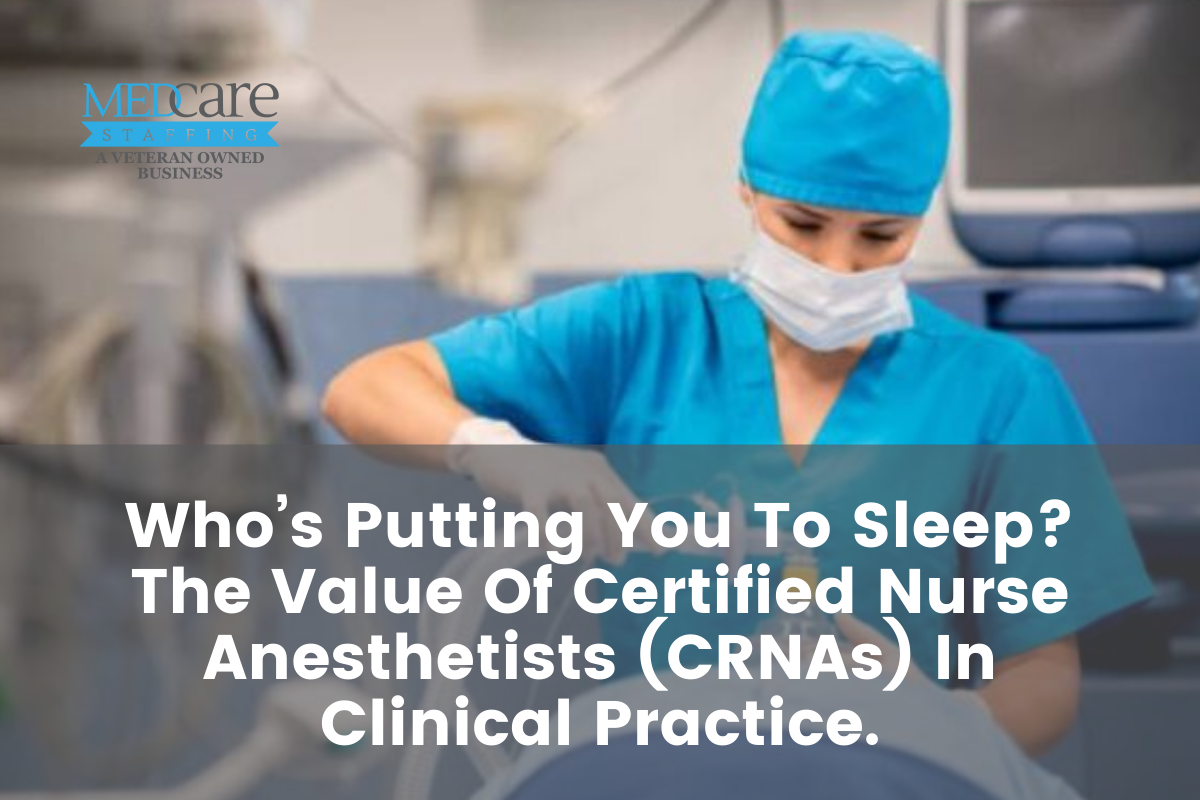 Certified Registered Nurse Anesthetists (CRNAs) can be found in operating rooms, intensive care units (ICU’s), Obstetric centers and or ambulatory surgery centers. They are advanced practice nurses who administer anesthesia and various other medications safely to over 50 million patients a year. Many CRNA’s practice autonomously or in teams depending on state regulations.

For over 150 years Certified Registered Nurse Anesthetists (CRNA’s) have been putting people to sleep in the United States. The Anesthesia care in the U.S. was mainly provided by trained nurses supervised by surgeons until anesthesiology was developed as a medical specialty.

Nurses first gave anesthesia in the Civil War while they were caring for wounded soldiers. Surgeons sought out nurses to give anesthesia due to the high morbidity and mortality rates they were experiencing during surgery. In 1877, Sister Mary Bernard became the first nurse to specialize in anesthesia at St. Vincent’s Hospital in Erie Pennsylvania.

The first CRNA known as “the mother of anesthesia” was Alice Magaw in 1893. The title was given to her by Dr. Charles Mayo due to Mary’s magnificent mastery of “open drop ether.” She founded the first CRNA program 1909 by  at St Vincent’s hospital in Portland Oregon. Originally, it was a course consisting of 6 months that focused on relevant anatomy, physiology and anesthetics.

Since World War I, nurses were the principal providers of anesthesia during surgical procedures. CRNAs have been wounded in military combat, have been prisoners of war and died for their country. There are even 2 names of CRNA’s engraved on the Vietnam War Memorial 1st Lts. Kenneth R. Shoemaker, Jr., and Jerome Olmstead. Several CRNA’s also served as chiefs in the Nurse Army Corp during the Vietnam War.

Agatha Hodgins founded the National Association of Nurse Anesthetists on 1931 in Cleveland Ohio. The first certification exam for CRNA’s was administered in 1945.

CRNAS were found to be the most cost effective sole anesthesia provider in the model of anesthesia delivery with no measurable difference in the quality of care per a study in the Journal of Nursing Economics. There are many studies that have also found no difference in care between nurse anesthetists and physician anesthesiologists according to a literature review by the Cochrane Collaboration. A recent study in Medical Care (June 2016) noted there was no measurable impact in anesthesia complications exhibited by CRNAs scope of practice or practice restrictions.

It wasn’t until 1986 that CRNAs became the first nursing specialty granted direct reimbursement rights from Medicare. U.S. Congress passed a legislation in 2020 that prohibits health plans from discrimination against qualified licensed healthcare professionals which include CRNAs and other non-physician healthcare providers.

The federal physician supervision rule for CRNAs was changed in 2001 by CMS. State governors are allowed to opt-out of the facility reimbursement requirement used by surgery centers and ambulatory surgery centers by meeting the following criteria

Which states have opted-out?

Approximately 19 states including Guam have opted-out of the federal physician supervision  requirement. These states include Arizona, Oklahoma, Iowa, Nebraska, Idaho, Minnesota, New Hampshire, New Mexico, Kansas, North Dakota, Washington, Alaska, Oregon, Montana, South Dakota, Wisconsin, California, Colorado, and Kentucky. However, due to the COVID-19 crisis in 2020, CMS suspended the supervision of CRNA’s in order to further increase the U.S. healthcare delivery system. A January 2021 CMS reports from the COVID-19 crisis stated that CRNAs were among the top 20 specialties that served the most beneficiaries in non-telehealth care between March 2020 and June 2020.

What does it take to be a CRNA?

Today all 50 states in the U.S. utilize CRNAs. CRNA programs take into account the complex matter of providing anesthesia care and the curriculum that is necessary for nurse anesthetists. In order to practice, CRNAs must hold a master’s degree in nursing, but more employers are preferring those who hold a doctorate of nursing practice (DNP) degree with national certification. On average, registered nurses entering nurse anesthesia programs have been in practice for approximately 2.9 years.

Between 2019 and 2029 the Bureau of Labor Statistics (BLS) projects a 45 percent job growth for CRNA’s. CRNAs are the highest nursing profession with an average mean salary of $189, 190.00 per year.

CRNAs can be considered one of the most trusted professions per Gallup poll results. Places like rural America benefit from CRNAs due to their cost savings and reimbursements as compared to employing an anesthesiologist. Many locum Tenens employ CRNAs to work in various areas around the U.S. and offer the benefits of work travel opportunities.

If you are a CRNA looking for Locum Tenens opportunities or a healthcare facility looking to employ a CRNA please contact a recruiter at Medcare Staffing.